“You Shall Not Pass!”

Occasionally, it feels as though LEGO misses out on ideas for its licensed franchise sets. Admittedly, LEGO can only put out so many sets per franchise. They have their own limitations in regards to number of sets per year, the number of product lines they are supporting at a given time, the contracts are typically for just a few years, and their business model is such that it doesn’t behoove them to repackage certain mini-figures more often than necessary. Furthermore, one of the driving aesthetics of LEGO was that the builders should use their imaginations to create scenes that deviate from the original instructions.

However, sometimes they just don’t supply enough of the right pieces – even when you are mixing and matching elements from different sets. Want to create a scene featuring K-2SO, your favorite depressed android from Star Wars: Rogue One? Be ready to shell out a lot of money for the one set that has him. Alternatively, you can spend far less to get just his mini-figure separately from a dealer or on eBay. This isn’t a bad strategy if you only occasionally resort to it, but dropping $10-$15, or potentially much more, per mini-figure starts becoming rather pricey if you do it often. Furthermore, you need to make certain you can identify authentic LEGO mini-figures from the counterfeits, because there are a ton of them out there and many of them are almost indistinguishable from the real thing. But, at least he’s available. Don’t bother looking for Eowyn to create a new Lord of the Rings scene as LEGO never made one for any of the LotR sets. (More on white male privilege in the LEGO multiverse in a future post.) 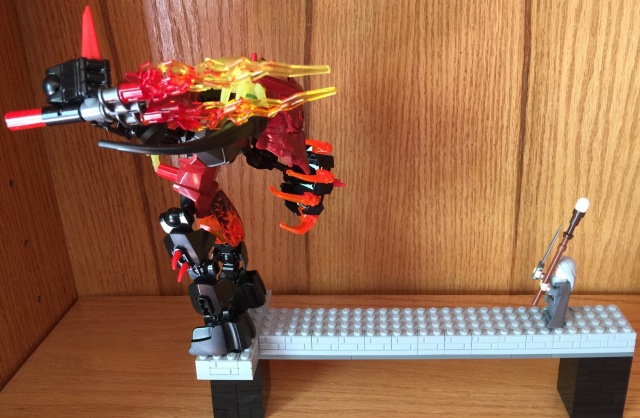 So, sometimes, the best you can do is improvise with the materials at hand. This is foundation underlying the “LEGO Set That Never Was” series. My introductory build should be readily obvious for anyone familiar with the LotR movies. For those who aren’t, it’s the Bridge of Khazad-dûm, where Gandalf faces down the Balrog and saves the rest of the Fellowship of the Ring. But, there are a couple issues to overcome in creating the scene. The first, and by far the larger, is that LEGO never issued a Balrog. Luckily, they did produce a character, Pyrox, for their Hero Factory series that looks vaguely enough like a Balrog for him to serve as an appropriate stand-in.

At first glance, he shouldn’t seem to be much of a problem, as he appears in a large number of LotR and Hobbit sets. However, when you watch the scene, you notice a few important details that need to be recreated: Gandalf is without his hat, he’s holding a sword, the end of his staff is brightly glowing. There isn’t a single Gandalf mini-figure that meets all these criteria. Without getting into all the details, it became time to mix-and-match components from different sets (including finding the Gandalf head piece with the appropriate determined glare in his eyes). Although I was able to use the directions for Saruman’s staff in The Wizard Battle set as a guide to creating the right look for Gandalf’s, I had to use one piece that wasn’t quite the right color, and it’s noticeable just below the white sphere representing the light on the end of his staff. 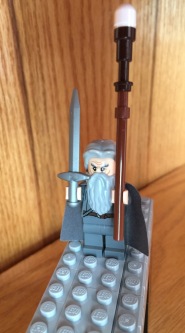 In the end, this was actually a rather simple “Set That Never Was” to create. In fact, I made it even easier on myself by not creating behind Gandalf a ledge large enough to hold The Fellowship (and I do have all the other figures, so this can be done.) Furthermore, I should have incorporated the right kind of arched pieces to recreate the side of the bridge that the Balrog stood upon when the showdown started. I will likely go back and incorporate those elements in a rebuilt version of the scene, but for now, I was happy with this rather simple creation.

My next “Set That Never Was” will demonstrate what happens when I need to start incorporating elements from sets produced by some of LEGO’s competitors.

A dad and loving husband who is also an easily distracted sf&f junkie, LEGO enthusiast, Phillies fan, and writer wannabe who really has too many other responsibilities to be working on his many different on-going projects.
View all posts by Matthew Appleton →
This entry was posted in Builds, Set That Never Was and tagged Lord of the Rings. Bookmark the permalink.