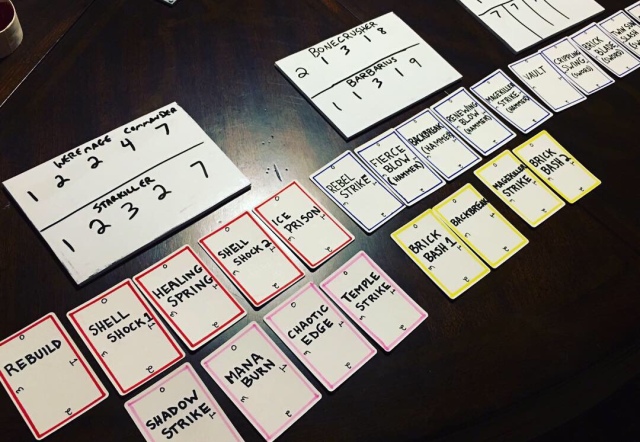 “1. Can we successfully split out a Hero’s 16 Ability Cards so multiple players can use the same class and still be as effective?”

…because it’s a fascinating question, and gives us the chance to “officially” resolve multiple action items from the past year.

Some background: late last year, we demoed The Black Brick to a local wargaming group. Overall, they enjoyed the game and most of the mechanics seemed to click with them.

We were especially pleased when the Hammer Warrior instinctively played an Ability Card as a response to an incoming attack—even before we had ever mentioned it was an option.

Hilariously, this playtester’s instinct aligned with feedback from an even earlier playtest, where our testers at that time had suggested more ways and opportunities to play Ability Cards. Moments like these have definitely helped us to validate the direction of the game. Haha

In the feedback session after the wargamers’ playtest, their thoughts were varied and broad, touching on Ability usage, combat mechanics (rightly so, given the group), naming conventions, and a few notes on Dice Plate implementation and balance.

However, one bit of feedback really stuck with us: that instead of giving a player all 16 Ability Cards to test a game they’d never even heard of before, how about we break it down into loadouts?

Stellar idea, and though it took us a few months to get around to incorporating it, we’re pleased with the result. It’s added an entirely new wrinkle to building a Hero, because it created sub-classes, which is going to enable players to have multiple “builds” of, say…Necromancers in a game: 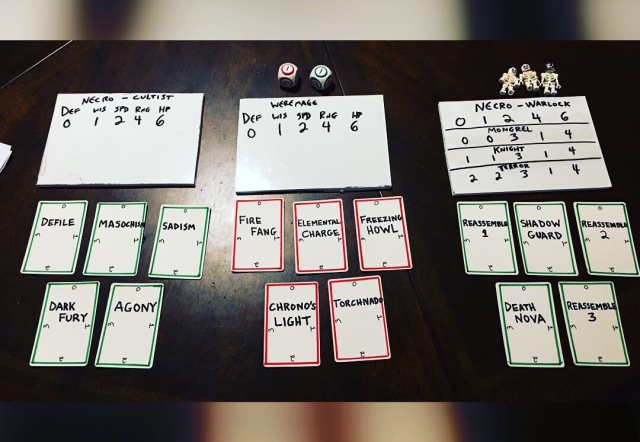 While the Abilities Masochism and Sadism do need to be buffed (hmm which one of us could help with skill rebalancing…), the game and our Necromancer duo here were scary fun, and now we’re pretty well convinced that the answer to that question…

“Can we successfully split out a Hero’s 16 Ability Cards so multiple players can use the same class and still be as effective?”

…is a big “yes.” On the Cultist’s turn, they played Dark Fury to give the Weremage +1 Action until the end of the round, then hexed an overly aggressive Warrior Minion with Agony, which deals 2 Wound Points when the target uses Strength. The foul beast was no match for the Warlock’s horrific Necromongrel onslaught that followed! 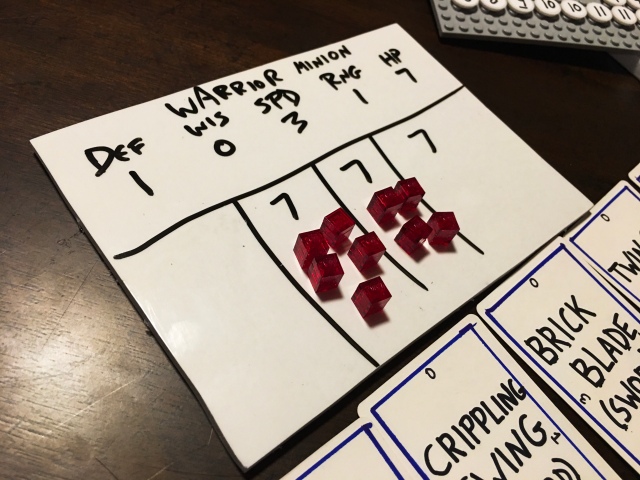 See that empty slot on the left? It used to be the Minion hexed with Agony. Ouch. And things aren’t looking good for the rest of the underlings, either. They can only take 7 Wound Points before shuffling off this mortal coil, so…

We’re very excited to see how the game continues to grow. Next post will focus on numbers. Specifically, player count. We’re still tossing the idea around, but we believe our game will be able to support 1-36 players. More on that soon!